Rule 66 states you should never cycle more than two abreast, and ride in single file on narrow or busy roads.
(http://www.direct.gov.uk/en/TravelAndTransport/Highwaycode/DG_069837)

This means cycles are perfectly legal to cycle side by side on most roads in the UK. Obviously some common sense needs to be used to work out if and when cyclists need to single out to let cars overtake but on the majority of UK roads cycling 2 abreast is allowed. Usually a group of cyclists will shout forward that a car is waiting ("Car Up") and if the road is too narrow for the car to pass the group safely while they are two abreast they will single out. However, if there is enough room but there are oncoming cars preventing the overtake the group will probably not single out.


Why do motorists get annoyed by cyclists two abreast?

There are many reasons why motorists tend to get annoyed so here are a few that I know of:

So why do cyclists cycle two abreast?

There are many reasons why cyclists choose to cycle two abreast so I'll give you the reasons that I know of.

Simply put, it's safer for cyclists to ride two abreast, it means that motorists usually have to overtake in a proper manner rather than overtaking in the same lane as the cyclists. If a group of cyclists are in single file, motorists will often assume they can overtake in places which are not safe and will not leave the cyclist enough room. Motorists should give cyclists the same amount of room they would give another car when overaking (please see the Overtaking Cyclists page for more details) which means they should be on the other side of the road and would have to wait until there are no oncoming cars. Being in two files usually forces this scenario but riding in single file can lead the motorist to think they can overtake on the same side of the road if there are oncoming cars thus not giving the cyclist the correct amount of space.

It allows motorists to overtake quicker!?!

For those that cannot understand this, here is an illustration: 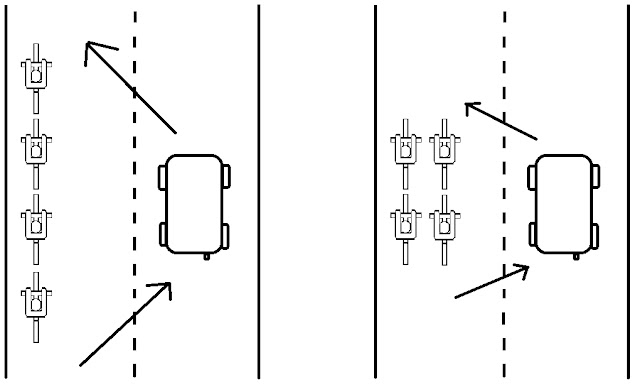 So presuming that the car needs to give the cyclists the same space as another car (again see Overtaking page), there being one or two lines shouldn't matter in terms of distance needed to pull out to the right but two lines decreases the distance for which the car is performing the overtaking manoeuvre and therefore the time which to complete it making it safer all round.

Cyclists out for a long ride will have a much more enjoyable ride if they have someone to talk to, and enjoying the ride is the main point of the ride for most. Most cyclists prefer to have someone to chat with but this does not mean that they are not riding safely, most car drivers will talk to their passengers and this is not regarded as unsafe driving!